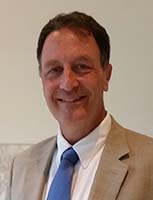 The Rev. Dr. Bill Steinberg is the founding pastor of The Church of the Resurrection.

The son of an Episcopal priest, Bill grew up in the Midwest and finished high school in Oregon. He graduated from Western Oregon State College and went on to receive a Masters of Divinity degree from Church Divinity School of the Pacific in 1987. Working in the area of Congregational Development, Bill earned a Doctor of Ministry degree from Seabury-Western in 2003.

Prior to coming to North Carolina, Bill served as head pastor at St. Paul’s Episcopal Church in Walla Walla, Washington for eight years. In 1999, sensing a call from God to accept a new challenge, the Steinbergs moved across the country to build a new type of congregation from the ground up in the north Raleigh-Wake Forest area. In the fall of 2005, Bill was appointed pastor of Trinity Episcopal Church in Fuquay-Varina.

In 2008, Bill announced he was forming a new Anglican congregation in the Fuquay-Varina/Holly Springs area. On March 28th, 2008, The Church of the Resurrection (CTR) held its first service – and has continued growing in faith, members and ministry to this day.

Bill brings to CTR a great desire to see people come to, and continue growing, in faith. He has a wealth of experience in congregational development and in strengthening lay ministry. An engaging and creative speaker, Bill has a knack for making the Bible come alive for his listeners in new ways.

Acting upon a life-long interest in the legal profession, and bringing it together with his pastoral skills and experience, since 2008 Bill has been serving as a certified Mediator, volunteering several times each month with Carolina Dispute Settlement Services. Bill’s other outside interests include fly-fishing, cooking, and fitness. Bill resides in Willow Spring, just outside Fuquay-Varina. His son Michael is employed with a pharmaceutical development company in Raleigh.